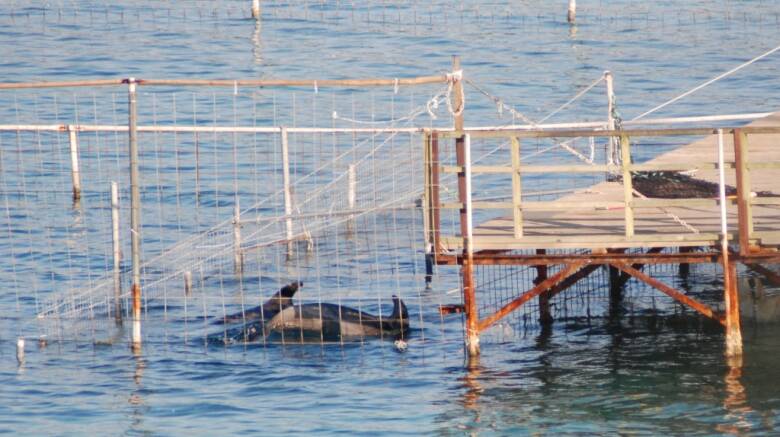 Right after four dolphins were moved from Bodrum to Kaş on December 8, 2011, we received another message on 27.12.2011 informing us about the transfer of three new dolphins that have been imprisoned into a 5-6m2 space in a sea-pen in Bodrum – Güvercinlik dolphin park. For this reason, we are starting the legal procedures against this infringement of law right away by adding the recent photos of the dolphins and our letter to the authorities.

You can use your right to information act as well and, just like we do, you can send the letter below or your personal opinions on anti-captivity to the mentioned authorities below. Do not forget to write down the date, your name & surname and ID number, if applicable.

On 27.12.2011, Freedom for Dolphins Platform (Yunuslara Özgürlük Platformu) was informed by an e-mail message that 3 dolphins were placed into the sea-pen at Güvercinlik dolphinarium in Bodrum, right after the 4 dolphins were moved to Kaş on 08.12.2011. Through our connections in Bodrum, we have realized that dolphins were actually moved to the sea-pen (Appendix 1 – photos taken on 27.11.2011).

On 08.12.2011, the Bodrum-Güvercinlik dolphinarium was emptied out and the 4 dolphins were moved to Kaş. Soon after, a national campaign was started by the Platform and other local NGOs in order not to let the authorities to re-open the Kaş Dolphinarium. On the December 15, 2011, a letter was also sent to Mehmet Kocadon, the Mayor of Bodrum, by the Freedom for Dolphins Platform, which asked about the status of the Bodrum Güvercinlik Dolphinarium’s license and its current status (Appendix 2). However, Mehmet Kocadon has not responded the letter yet as of today.

In April 2011, Mehmet Kocadon, the Mayor of Bodrum, pledged to close down the Bodrum-Güvercinlik Dolphinarium and not to open another one in Bodrum, following negotiations with international animal rights groups ProWal and WDSF (The letter can be obtained from these NGOs).

In this regard, considering that Mehmet Kocadon, the Mayor of Bodrum, has left our questions unanswered and that he has forgotten his internationally proclaimed pledge, we ask the relevant authorities to send us documented, official responses to all our questions below.

In this regard, I use my right to information and expect to receive official response to all my questions below from each and every authorized institutions and relevant departments.

1. How many dolphins were brought to Bodrum and where did they originally come from? Either from a dolphin park or imported from another country? Are the owners and the relevant authorities planning to bring other sea mammal species soon?

2. If these dolphins were imported from another country like Ukraine, do the owners have necessary CITES certificates of origin and transportation? If yes, I request a copy of those documents. I also want to learn about the sex and the ages of all the dolphin in Bodrum Güvercinlik.

4. Which company has the ownership and the transportation permission for the dolphins? In what terms is the Bodrum Güvercinlik Dolphinarium related to Whale Turizm Ltd. Şti. and Erhan Sarıcaoğlu in Kaş?

6. Most importantly, how is this establishment in Bodrum and the transportation process permitted and considered “legal” with regards to the provisions of 5199 Animal Protection Law and the international Bern Convention? All this process violates the main articles of 5199 and even the “exceptions” in the article 9 of Bern Convention, where those dolphin species in the Kaş Dolphin Park are specified as needing “special protection” in Appendix II and “all forms of deliberate capture and keeping and deliberate killing”, “the possession of and internal trade in these animals, alive or dead” are prohibited. In the same manner, these facilities violate the 90th article of Turkish Constitution.

7. Finally, it’s been obligated by the Bern Convention that “the Contracting Parties shall report every two years to the Standing Committee on the exceptions made under” article 9.1. Are there any reports already been sent to the Committee? If yes, I request copies of those reports that have been sent prior to 2011.

8. I ask you to to use your legal authorities and not to let this dolphin park do business. I also want the dolphins to be taken away from the business owners and taken under protection as soon as possible.

In this context, I request an official response to my letter within the prescribed legal time.

APPENDIX 1– Recent photosof the dolphins transferred to Bodrum-Güvercinlik taken on 27.12.2011

This website uses cookies to improve your experience while you navigate through the website. Out of these, the cookies that are categorized as necessary are stored on your browser as they are essential for the working of basic functionalities of the website. We also use third-party cookies that help us analyze and understand how you use this website. These cookies will be stored in your browser only with your consent. You also have the option to opt-out of these cookies. But opting out of some of these cookies may affect your browsing experience.
Necessary Always Enabled
Necessary cookies are absolutely essential for the website to function properly. This category only includes cookies that ensures basic functionalities and security features of the website. These cookies do not store any personal information.
Non-necessary
Any cookies that may not be particularly necessary for the website to function and is used specifically to collect user personal data via analytics, ads, other embedded contents are termed as non-necessary cookies. It is mandatory to procure user consent prior to running these cookies on your website.
SAVE & ACCEPT
↑